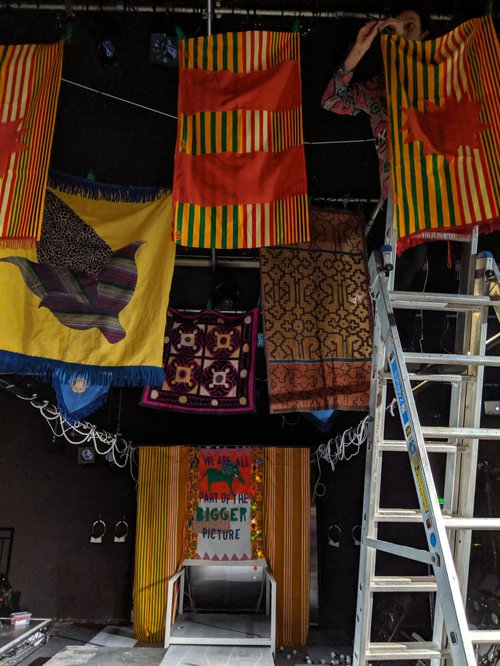 It has been a tremendous pleasure to see the Latin American people in the performing arts come together in London lately. The admirable, ongoing efforts of established creatives and the ground-breaking initiatives of newcomers have coincided at their finest. Aided and empowered by organisations and venues across the city, they have joined forces to bring forth what seems to be an extended season of electrifying events. Being part of the audience of ‘Barrio’ at the Southwark Playhouse on November 3rd only made me confirm this.

First of all, I was delighted to see that the popularity of its first edition had resulted in it being moved from the ‘Little’ to the ‘Large’, and that, even provided with the extra capacity, the show had completely sold out. It was also immensely satisfying to witness, for the second time, the combination of theatre artists and members of the local community: working families from different backgrounds that have made the Elephant and Castle area their home. What a commendable achievement to have initiated a platform in which they, for whom going to the theatre is a rather foreign activity, feel welcome, interested and, most importantly, identified with what happens on the stage. It is no wonder that, on arrival to the Southwark Playhouse that evening, there was a warmer feeling than usual.

Of course their presence is related to one of Barrio’s defining purposes: to get involved with the matters that surround the local families, their daily issues and concerns. Beyond the exhilarating live music, the colourful decorations, and the richness and variety of the acts, this is what really lies at the heart of ‘Barrio’. There was something incredibly touching in getting to know local businesspeople who write poetry in their free time, seeing school children dance and voice their own early manifestos and listening to their teachers share the passion they have for their work. It was watching the simplicity of life framed and magnified by the enchantment of the stage.

As for the artists’ work, it is always a gratifying experience to see someone deliver a rendition of their own work; the commitment and passion exceed any other occasion. However, it is even more gripping to see a number of them come together under a common motive, to explore and share their ideas free from the constraints of a traditional theatre performance. There really was a sense of accomplishment in seeing these artists with such a variety of skills, and roots in all the different countries of Latin America, produce something brand new right there in front of the audience’s eyes. Every act was unique and refreshing.

Having witnessed the many expressions of what ‘identity’ and ‘belonging’ mean to those who took part, I left the theatre feeling hopeful and proud, and certainly looking forward to the next edition of ‘Barrio’. It was a thought provoking show and the initiative is brimming with possibilities. The truth is, being so far from the place I call home, I couldn’t help to feel less like a foreigner that evening. Among all the people involved: those who were on stage, behind the scene and on the seats, there was an undeniable sense of community.