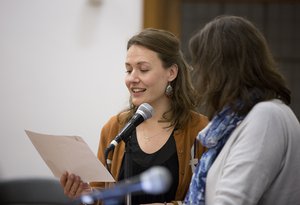 Sophie Stevens and Catherine Boyle
read extracts from Lídia Jorge's work
in translation into English at the
Arts and Humanities Festival 2017.

Language Acts and Worldmaking takes as a starting point the idea that language is a historical and material force. This force shapes the worlds that we inhabit but is simultaneously shaped by these worlds in a ongoing two-way process. Languages at Times of Crisis emerged as a result of discussions with my colleague, Dr Alice Hazard, about the people who enable, facilitate and shape the work that language is able to do in the world. We kept returning to the work carried out by translators and interpreters in challenging and life-changing situations for whom the ability to rapidly move from one language to another is essential.

Last year, as we began planning for the ‘Languages Memory’ conference, we reflected on the role of languages in the aftermath of the Grenfell Tower fire (June, 2017). As the need for translators to assist in disseminating essential information to a multi-lingual community in a state of shock, desperation and pain became apparent, Lily Allen and Sam Duckworth wrote in the Guardian Opinion: ‘Language Reach translated 18 languages in 48 hours, free. The council and the government have no excuse. It’s almost as if they don’t understand their capital city’s history.’

What struck me was that it was almost as if the role of language in an area which is renowned for being so culturally diverse and eclectic had been forgotten. This is not a simple problem to tackle: there may be a lack of understanding, a lack of memory and a lack of resources. But what about those people who did step up and use their skills to translate information about emergency resources, places people could shelter and ways to access amenities? Their language skills were fundamental in a critical moment of crisis in London.

As we began to investigate further, it became clear that if the work of language in the world is sometimes disregarded or ignored, the work of translators and interpreters in facilitating crucial interactions is often invisible and unrecognised. Alice has written about this in her blog. These people are equipped with so much more than the ability to transform one language into another so that two people can understand each other; they have to work under pressure, develop specialist knowledge and remain calm in a crisis.

I am really keen to find out about the different practical tools that translators and interpreters use to equip themselves to carry out this work. This builds on the idea of the ‘Translator’s Toolkit’ developed with my colleague at Warwick University, literary translator, Rosalind Harvey. As a collaborative project and resource for undergraduate students, we sought to create a record of the wide range of ‘tools’ that students used to carry out their translation assignments; google maps, online monolingual dictionaries and specialised slang dictionaries. As part of the Languages at Times of Crisis project I hope to build on this idea and to learn about, document and understand the range of tools used by public service translators. I also want to reflect on how, as an academic and theatre translator, there are differences and similarities between the tools and resources that we use.

Through activities developed by theatre practitioner, Sophie Besse, Artistic Director of PSYCHEDelight, and photographer José Farinha, the Languages at Times of Crisis workshop aims to create a space in which the participants can reflect on their work without breaching codes of confidentiality. Through this collaboration, we seek to open up the idea of crisis to explore the range of work undertaken by translators and interpreters in our city every day. By developing workshops and creating ongoing research, we seek to recognise the essential work of languages at times of crisis.