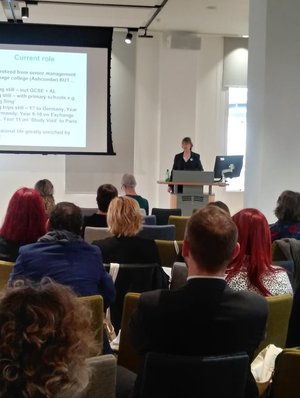 On Saturday 18 May the 2019 Network for Languages London and Language Acts and Worldmaking conference took place, writes Natalia Stengel Pena. It was early morning at King’s College London, Bush House, and women and men gathered, all motivated to discuss one thing: the general landscape of modern language teaching and how schools and universities may work together to promote language learning.

The welcoming speech was given by Prof Debra Kelly, University of Westminster and Dr Ana De Medeiros, King’s College London, Modern Language Centre. The keynote presentation was given by Helen Myers from the Association for Language Learning London who shared her experience as a language teacher and as a consultant on the subject. Both speeches highlighted how important the teaching of languages is and encouraged the participants to consider themselves as agents of change.

For the rest of the day, the group was divided into workshops.The workshops encouraged the participants to share their experiences, concerns and needs related to language teaching. The morning workshops focused on the challenges implied in transitions. Some proposed solutions they have found, or activities that have made the transition easier and improve the results (for example, teachers from sixth grade working with teachers from the seventh grade, the possibility of students who already passed transition sharing their experiences, trips to countries with different speaking languages). Others presented tools and materials designed to improve transition and provide teachers with exercises and resources to teach in different languages. For French teaching, the Institut Français presented the project Culturethèque, since it has a Primary French program which includes a level (the Multicolore) dedicated to transition. For other European Languages, one workshop explored the Language Magician as a Transition Tool. Another tool mentioned to promote fun language learning, besides song exercise, was Kahoot!

One of the main concerns shared by many was the need for information and feedback between primary schools and secondary schools to guarantee the level students have in the different languages they have been studying. Clare Seccombe’s transitional survey was pointed out several times as a really useful information tool.

The afternoon workshops worked with curriculum changes, the opportunities and challenges that came with these. They focused on teaching language not as something isolated, but as something related to a different culture, history, geography and traditions which may change the perspective towards language learning.

The last workshop, which reunited the group, was led by academics from the Linguistics in MFL A-Levels project and explored Linguistics as a fundamental subject to increase interest in language learning as well as a better understanding of the importance of teaching different languages in schools. 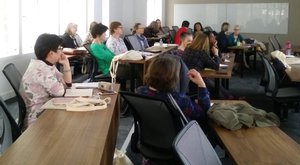 Finally, there was a Round Table to close the day, where basic conclusions were drawn and commitments to improve language teaching were made. The highlights of this last gathering were:

Throughout the day, participants found allies, others with similar experiences to theirs, solutions to difficulties they may have been facing, useful tools and the fact that they are not alone when teaching a language.

Are you a languages teacher who wants to join the Network for Languages London mailing list? Email languageacts@kcl.ac.uk telling us what language and stage you teach and we'll keep you informed of our networking events.