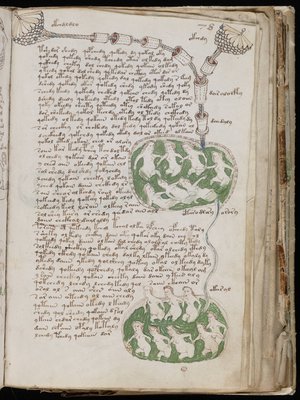 A page from the Voynich manuscript

In this blog post, Carlos Montoro shares his response to the position papers presented at the fourth Language Acts and Worldmaking debate. Debate 4: Has the digital world revolutionised language pedagogy?

This post is written in memory of the late Open University Professor Stephen Bax, who sadly passed away at the end of 2017.

Before addressing the topic in hand, let me pay a small but heartfelt tribute to Professor Stephen Bax. He was an expert in computer-assisted language learning (CALL), and yet perhaps paradoxically he kept a lifelong interest in the Voynich manuscript (1404-1438), a medieval text written in a mysterious language that has remained undecoded for centuries up to modern times. What was behind Bax’s fascination with the manuscript? I shall come back to this later.

At this debate, oriented towards rather more modern and pressing issues, technology in language pedagogy was presented as a challenge, as part of a brave new digital classroom (Blake, 2013), a dystopian world, in reference to Huxley’s (1932) novel that satirised utopian novels written by H. G. Wells, or perhaps to Miranda’s speech in Shakepeare’s (1610-11/2011) The Tempest, which is possibly satirical too.

The overall gist of the debate seemed to suggest that digital learning has changed the way we experience learning languages. But the very fact that we were having this debate was an indication that the opposite might be true because as Bax (2003) argued a technology has been assimilated only when it becomes transparent, when there is no need to focus on it anymore. In fact, as Mirjam Hauck (The Open University) pointed out at the event, most digital learning materials still follow off-line learning principles. The difference is, as fellow discussant Antonio Martínez-Arboleda (University of Leeds) rightly said, that learner exposure to authentic materials that used to be desirable is now unavoidable, as web access makes them pervasive.

The issue of whether the digital world has revolutionised language pedagogy misses the point that the digital has revolutionised the world, and all the worlds included in this world, of which the modern languages world is no exception. There is no cause-effect relationship between the digital world and the language learning world. Instead, what we are witnessing is the birth of a new era, a new civilisation in human history, a paradigm shift that changes the parameters for almost all human activities, from law to government, from industry to education. Are we then talking about a new period, a new time in our history?

As the recent Cambridge Analytica-Facebook case shows, we are only beginning to come to terms with the way new digital tools such as social media operate. This is just a threshold, a liminal phase from pre-digital to fully-digital. At this stage, as Mirjam Hauck suggested, the focus should be on the materiality of digital tools and language (pregnant with meaning-making potential), on our agency as designers and users of the tools and on mediation processes that we engage in as we learn and live differently.

Digital tools are not the same as traditional instruments such as pen, paper and text. A digital device, for instance, blurs the lines between instrumentality and socialisation, work and life, forming a three-dimensional wide world or a 3-D mosaic to use Antonio Martínez-Arboleda’s image. Perhaps more importantly, digital tools give rise to as many worlds as users of them because we each make use and sense of them differently, we are all individually and collectively engaged in ways of worldmaking (Goodman, 1978). As Mirjam Hauck argued, digital tools are multimodal and thus awareness and control over these requires multiliteracy, particularly digital literacy.

As is often the case in the field of computer-assisted language learning (CALL), the argument was made for the need for learner autonomy, a means that often becomes an end-goal in itself. But my fear is that the frequent drive for autonomy consciously or not echoes what is increasingly called ‘the direction of travel’ in educational institutions, a market-oriented, neoliberal and individualistic approach that leaves us all, students and teachers alike, confused, confounded. Along similar lines, the debate included several mentions of the ‘digital natives’ concept (Prensky, 2001), seen by some people like Josie Fraser on Twitter as a shibboleth to test who knows what about educational technology and digital inclusion. Yet, the concept opened up the question of whether the digital world is a place where one can be born.

Promoting autonomy is often coupled with a focus on the impact of technology on teachers and learners. For me, education is not a process of cause and effect, inputs and outputs. Far from behaviouristic views of learning, I would argue that technology, teachers and learners belong to a complex system of human activity where each element shapes and is shaped by others. The way we talk about these processes, our discursive practices, can be our first steps to break free of marketization constraints in academia.

If this a radical pedagogical shift, as Mirjam Hauck described it, let us stay true to the etymology of ‘radical’. Let us seek the sociocultural roots following a systemic approach to find insights into learner development more broadly: learners are not just learners; they are human beings and their development is human development. Their needs are pedagogical as much as personal and social. How can we combine course content with personal goals? How can learning materials be more flexible, customised?

Assuming this world is truly dystopian, unjust, the way to disrupt it is not through individual agency and work within the individual zone of proximal development (Vygotsky, 1978) but through collective agency and progress in collective zones of proximal development (Engeström, 1987) by means, for instance, of participatory formative interventions.

In this context, Antonio Martínez-Arboleda claimed that the teacher might be a kind of Noah figure, guiding the few along a digital flood of biblical proportions. Seeing the language teacher as the chosen expert puts undue pressure on our fragile status. Dystopian views might not be reflective of who we are or want to be. Instead, emancipatory pedagogies, utopian but necessary, can lead us all forth out of the modern languages deadlock.

Utopia is a concept as full of satire as dystopia. It was coined by Thomas More (1516/1967) as a pun on Greek ou topos (no place) and eu topos (good place). This reminds me of Bakhtin’s (1981) concept of the ‘chronotope’, overlapping folds of time and space, overcoming linear time and space dimensions, a holographic reality. Perhaps digital language learning is not a place after all but it is a good place all the same.

Finally, let me address the initial question regarding Bax’s fascination with the mysterious Voynich manuscript. Perhaps to his curious mind, modern languages and digital technology did not differ so much in nature from ancient languages and medieval technology. The manuscript, when it was finally decoded only very recently, revealed a guide to women’s health, so timely in our #metoo age, so timeless. I would like to think that Professor Bax found out what it all meant before his untimely death. Including the fact that the manuscript was a customised copy for a single person. If that was possible even before the invention of the printing press, could we not create customisable digital learning materials now?