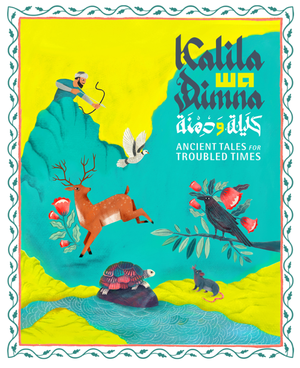 P21 Gallery and Language Acts and Worldmaking are proud to present Kalila wa Dimna: Ancient Tales for Troubled Times, a collaborative art exhibition and events programme that brings together academic researchers, artists, curators, and community organizations. The project is inspired by the global journeys of an ancient collection of moral fables that travelled across time and space, language, religion and culture.

Known in Arabic as Kalila wa Dimna, the fables have a long and complex history. Of Indian origin and composed in Sanskrit possibly as early as the third century BC, they were translated into Arabic in the eighth century by the Persian writer and influential courtier Abd Allāh Ibn al-Muqaffa’. Over the centuries they have been translated into more than 40 languages and read and re-interpreted almost continuously by different audiences.

Kalila wa Dimna: Ancient Tales for Troubled Times focuses on one of the book’s chapters titled the ‘Tale of the Four Friends’ or ‘The Chapter of the Ringdove’ – a story about looking beyond perceived differences, working together to overcome adversity and to build a sense of community and home, which is achieved through the exchange of words: in short, through storytelling.

The project is principally funded by The National Lottery Fund, Arts Council England and Language Acts and Worldmaking. The exhibition is hosted by the P21 Gallery.

Events as part of the exhibition include:

Registration to participate is needed. Click on each event to find out more.