The Language Acts and Worldmaking project on 1 February published a report on Attitudes towards digital culture and technology in the Modern Languages.

The report is based on a survey carried out by the Language Acts and Worldmaking project, one of four projects funded by the Arts and Humanities Research Council (AHRC) as part of its Open World Research Initiative, a four-year research programme which involves 15 UK Universities and a range of partners. The Language Acts project aims to transform modern language learning to shape how we live and make our worlds. This report is part of research carried out by the project's Digital Mediations strand, led by Paul Spence and Renata Brandao of King's College London's Department of Digital Humanities, which explores interactions and tensions between digital culture and Modern Languages research. 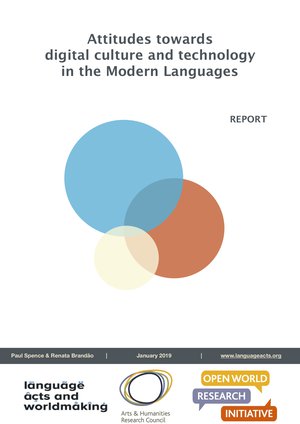 The report recommends more focused attention to digital in future modern language policy documents. It also suggests that ‘digital’ should not just be viewed in terms of ‘technology’, but rather be viewed as part of wider cultural, social and communicative practices.


Responding to the launch of the new report Paul Spence, Senior Lecturer in the King’s Department of Digital Humanities, said: “This report provides an insight into emerging learning and research practices in modern languages, which are increasingly learner-driven and which revolve around creativity, diversity, authenticity and peer-to-peer dynamics. Far from being replaced by digital languages, modern languages once again show their importance in influencing how we shape our understanding of the world, in supporting multilingual habits and in gaining a more rounded view of digitally mediated culture. There is still enormous potential for critical engagement with digital methods in modern languages, which we will explore further in future studies.”