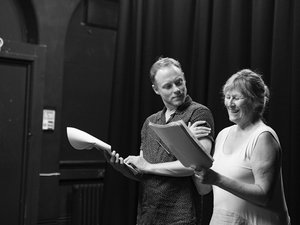 Image from rehearsed reading of Her Open Eyes by Raquel Diana at Out of the Wings Festival 2019, Omnibus Theatre. Photo credit ©Terry Cripps, 2019

It’s pointless to go on. It’s enough to name.

Written by Uruguayan poet Idea Vilariño (1920-2009), these words end the play Si muriera esta noche (If I die tonight, also the title of one of Vilariño’s poems) by Uruguayan dramatist Raquel Diana. Artists have always done more than just name. They have created, critiqued and imagined. And in many cases, they have taken their own or others’ life experiences as a basis for their work. There are many examples of this on stage throughout the world and, through the work of the Out of the Wings theatre collective, these lives have been presented through translation for London audiences as part of the Out of the Wings annual festival. In a workshop at the 2019 festival at the Omnibus theatre, we explored some of the challenges, questions and tensions that arise when actors, directors and translators are 'Playing the real', that is, dealing with plays based on the lives of real people.

Si muriera esta noche was written by Diana in 2017, directed by María Clara Vázquez, and premiered at the festival Ellas en la Delmira held at the Teatro Solís, Montevideo in 2018. The festival presents a series of monologues by women to celebrate the ‘month of women’ throughout March and International Women’s Day on the 8th of March. Diana weaves together extracts from Idea Vilariño’s poetry, essays, letters, articles and songs to create a dramatic narrative about the poet’s life. Performed by the playwright as a monologue, the play deals with the poet’s artistic practice, her work, her conflicts, her health and her relationships, including her relationship with Uruguayan author Juan Carlos Onetti. For Uruguayan audiences, those throughout the Spanish-speaking world, as well as students and researchers in the field of Hispanic studies, both writers and their relationship are well known. So, in the first instance, naming Vilariño is enough to attract an audience. But what else happens when you name a real person as the subject of a play?

It can evoke a sense of familiarity, of connection with someone we know. It can also provoke certain expectations because the person has been captured in a particular way in cultural or historic memory. And it can cause anger and frustration that they should become a character, a representation, subject to the imagining of someone else.

In one scene in Si muriera esta noche, Vilariño encounters Onetti’s wife: Idea goes to their home to return an injection that Onetti needs to administer that day, and which he had left at Idea’s house. When I saw the play in 2019, Diana depicted Onetti’s wife as panicky, deluded and melodramatic. Was Onetti’s wife like that? Did this encounter occur? Would I have taken an injection to my lover who had insulted me that afternoon? The answer to all of these questions is ‘maybe’. This is just one possible depiction of the characters, their actions, motivations and reactions. It is how Diana (as playwright and protagonist) imagined the encounter and, crucially, it made me imagine and reflect on what I might have done. If the play challenges our expectations and provokes us to reflect then, I would argue, it is doing a good job.

In the case of Si muriera esta noche, this imagining is amplified because the basis for the play is already creative work; the corpus produced by Vilariño. When Vilariño wrote in her poetry about herself and her experiences or those of others, she too was constantly representing, imagining and experimenting in her own work. Si muriera esta noche received excellent reviews and theatre critic Leonardo Flamia praised the play for making the audience forget that it was a play at all, so that, in the end, their applause was for Vilariño. This is testament to Diana’s decisions when creating the world of Vilariño on stage and her creative choices in constructing a captivating dramatic narrative. It is well-deserved praise for the evocative ways in which Diana recites poetry, sings and argues, as well as for the empathy she evokes for suffering, illness and heartbreak. The range of work demonstrates the vitality and agility of Vilariño as a creative artist and of Diana as an actor. But this is not Idea Vilariño. It is one possible imagining of her.

This capacity to imagine is at the heart of theatre and the work that playwrights, actors, directors and ultimately audiences are involved in. Even when the work is based on the real life of a person, what we witness on stage is one playwright’s imagining of that person’s life and experience. When this is based on historical accounts or documents, recorded footage or transcripts from court proceedings, there is still selection, interpretation and creativity involved. This is then amplified when a dramatic script is developed by actors and directors who also interpret and imagine. And there is further amplification when a play is translated, as the translator works to ‘imagine, and imaginatively discard, a range of potential performances for each moment; to rehearse and reassess, to reassemble and redress’ the possibilities for creating the play in the target language.[1]

A concept at the heart of our work on the Translation Acts strand of Language Acts and Worldmaking is ‘worldmaking on stage’ and this has been a central theme of two Forums, organised in 2018 and 2019, with Out of the Wings and Translation Studies at Goldsmiths. Through translating theatre from another culture, country and context, we can imagine others, their situation and the challenges they face. This can help us to develop a sense of awareness, empathy and curiosity about others. It is for these reasons that theatre and creative translation is fundamental in Translation Acts’ work with language students in schools. Contact with theatre from a different country and culture takes us outside ourselves and beyond our current surroundings. This is important for helping students to learn about and understand others but it is also of vital importance for those students who, for whatever reason, do not want to be the subject of their language learning but would rather focus on the life experience of a character, perhaps even one based on a real person. This is essential for students who are vulnerable, lacking in self-confidence or who have unstable and even dangerous home situations. In fact, exposure to the experiences of others, through theatre from a different cultural context, may help them to reflect on and articulate their own experiences in different ways and to seek support if they need it.

Working with an extract from a script in a different language offers multiple possibilities for engaging with students: acting it out to imagine what the performance would be like and focussing on the emotions of the characters can help to improve confidence and fluency in speaking another language. Using an extract as a basis for improvisation so that students creatively imagine what might come next as a way to extend the narrative can spark creativity and storytelling through theatre. By translating an extract into English, students apply their language skills to enable the text to travel into the target context and they imagine how it might be played in translation. Through translation we bring texts, characters and concepts into a new cultural context where they enter into dialogue with issues in the target situation. Through the imagined world depicted on stage, ideas are generated because we encounter new perspectives, and this enables us to begin to imagine possible solutions to the challenges faced by the characters and the challenges we ourselves face. In this way, we can embark upon our own process of worldmaking by imagining possibilities for the future.