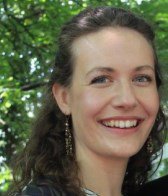 Sophie is a post-doctoral researcher, translator and theatre practitioner.

After completing her PhD, entitled Uruguayan Theatre in Translation: Performability, Mobility and Intercultural Dialogue, at King’s College London in 2016, she worked at the University of Warwick where she developed and delivered an innovative translation programme for Hispanic Studies students. Her research is informed and enhanced by collaborations with theatres, including previous projects with Blackboard Theatre, Arcola Youth Theatre and Out of the Wings. Her translations were selected for performance at the Out of the Wings Festival of Play Readings in 2016 and 2017.

Sophie’s research examines how translating and performing a play from a different cultural context creates a dynamic relationship between source and target cultures. In her work on the Translation Acts strand of Language Acts and Worldmaking she will analyse and translate the plays of female dramatists from Uruguay. Her research investigates the interaction between imagined worlds depicted on stage and cultural realities which exist beyond the theatre, including movements to eliminate violence against women, in order to explore how these playwrights can be seen as agents of cultural change. Her research focuses on how understanding acts of embodiment in theatre translation can shed light on the complexities of cultural contact and how they can be actively explored in the context of rehearsals, workshops and classrooms.