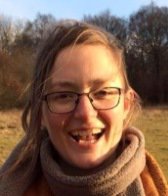 After completing an MPhil in European Literature and Culture, Alice came to King’s to undertake a PhD in French, focusing on medieval literature and modern French and Anglophone theory. While doing this research, she taught various language classes in the French department and became interested in language teaching and learning more broadly. She was drawn to the Language Acts and Worldmaking project because of its emphasis on real-world implications not only of language learning per se, but also of interacting with languages through literature. She is currently working on a survey of language training provision for research students in UK universities, and is also providing some of this training herself through teaching a series of advanced courses in modern and historical French for PhD students. Alice’s Language Acts and Worldmaking research aims to generate a detailed picture of attitudes towards and perceptions of language training for research students, and explicitly ties this in with the broader context of language policy and attitudes in the UK.