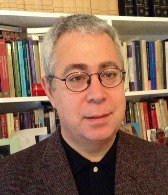 Julian is Professor of Medieval and Early Modern Spanish at King’s College London. After receiving his DPhil at Oxford (1984), Professor Weiss held positions at the Universities of Liverpool, Virginia, and Oregon (where he was Head of Romance Languages); he was appointed to King’s in 2001. An associated staff member of the Programme in Comparative Literature, he is also member of the international research group Seminario de Poética Europea del Renacimiento, based at the Universitat Autònoma de Barcelona, and one the partners of Language Acts and Worldmaking. His research and teaching interests range widely across medieval and early modern Iberian literatures: he has published numerous books and articles on such topics as medieval poetic theory, medieval and Renaissance lyric, clerical narrative, theories of gender, early modern censorship, manuscript studies and this history of the early printed book.

His current major project is a study of the early modern Hispanic reception of the Jewish historian Flavius Josephus (1st Century CE), which examines how the writings of this Romanized Jew were used by Christians, Jews and crypto-Jews to define Jewish identities and to understand the history of Jewish-Christian relations in Europe and the New World from 1492 to the later seventeenth century among, for example, the Sephardic communities of Mexico, Amsterdam and London. This project illustrates his work as co-lead (with AbdoolKarim Vakil) on the Travelling Concepts strand, for it is rooted in two fundamental interests: in interfaith relations within medieval Iberia and its historical legacy, and in a commitment to understanding the dynamic evolution of literary texts and ideas as they move across time and space.

For more about Julian's work in the project, see here.