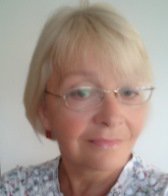 Bozena is the Post-Doctoral Researcher for the Loaded Meanings strand, investigating the linguistic corollaries of the ‘learned borrowings’ i.e. words of Greek and Latin origin which were integrated into Spanish, and other Romance languages, not as heritage, transformed Latin words, but embedded in these languages at diverse stages; a process which incessantly goes on (words such as mercadología and audioconferencia, for example). Her present research focuses on the historic and current cognitive connotations of these ‘learned words’, and how these merge in their actual meanings.

Previously, Bozena has worked as a Senior Lecturer in Spanish at Jagiellonian University, Krakow, Poland; as an English-Spanish Technical Translation Senior Lecturer at the Technical University of Madrid and as an Assistant Lecturer at the Instituto Universitario de Lenguas Modernas y Traductores at the Complutense University in Madrid. She has a PhD in Linguistics from the Universidad Nacional de Educación a Distancia in Spain and a Post-graduate Diploma in Translation. She has degrees in Spanish Philology from Jagiellonian University, and in English Philology from the Complutense University, Madrid. In her PhD dissertation she analysed, from an intercultural perspective, the Appraisal Theory applied to wine tasting sheets in English, Spanish and Polish, and their translations. She has published and presented conferences papers on the history of Polish translations into Spanish (1988; 1994; 1998); Spanish and English oenological languages (2015; 2014; 2012); MOOCs for digital humanities (2015; 2014); Spanish XVI century sensory perception language (2015) and XVI century sartorial terminology found in the Premáticas (2016), which became a stepping stone towards her interest in the ‘learned words’ Strand of Language Acts.  The project will allow her to obtain a deeper and better-founded perspective on the Spanish terms which are now considered common, everyday language and yet which originate from cultismos integrated into it in different stages of its history. As part of her work with Language Acts Bozena is keen to encourage prospective students of Spanish to see for themselves how intertwined European languages are, and how much they share.