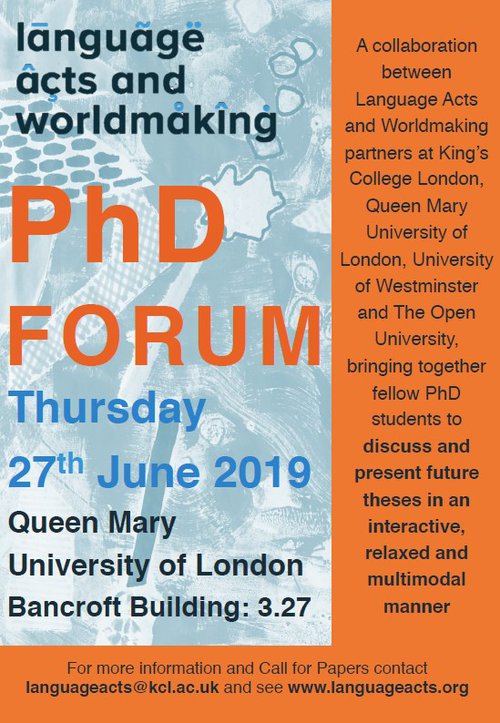 On 27th June 2019 we held our first PhD Forum as part of the Language Acts and Worldmaking Worldmaking Fair. Coming together as PhD students on the project in our first planning meeting, we talked about what we could contribute to the fair and what we would like to happen as a result of it. Working on Language Acts has made us all aware of the value of hearing about others’ work and approaches in understanding the wider aims of the project and in contextualising our own work. With this in mind, then, we decided to organise a PhD Forum, to make a space for us and fellow PhD students working in similar areas of studies, across different projects and universities, to share our work, methodologies, approaches and experiences. We wanted to create a sense of safe space, in an event organised and attended only by researchers at the same stage in their career to really encourage sharing and discussion. We hoped to confront the loneliness often associated with PhD research by creating an inclusive community of PhD students who share similar areas in research and not only encourage each other but also offer relevant feedback and comments on the work in progress from a constructive and humble point of view.

Our call for papers was broad and reached from our own areas of study and interest beyond. We reached out to colleagues in our different universities - Open University, King’s College London and Queen Mary’s University of London - and other universities involved in the project - University of Westminster - and beyond to PhD candidates from other OWRI projects and universities. We had people taking part in person, via skype and through poster representations of their work. Some participants were just starting the PhD journey, working on ideas based on Masters research and dissertations, and others were in the final stages and preparing for their final vivas. There was great linguistic and cultural variety in the session with Polish, Italian, Catalan, Gaelic and German languages and identities present, and between us all English and Spanish became common languages. 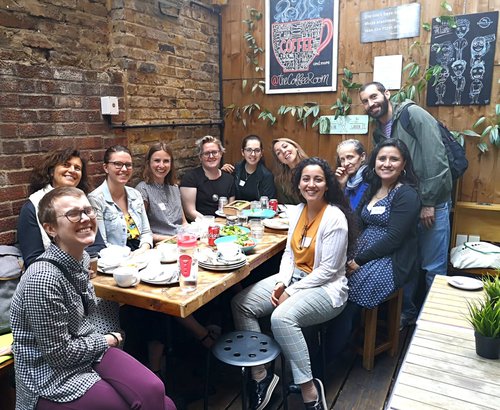 The resulting programme for the day was hugely varied but with overarching themes running throughout the day that became apparent in discussions and presentations. We grouped the presentations into four sections: Modern Language teachers; Crossing Borders and Languages and Literature; Modern Language Teaching and Learning; Mediating Minority Languages and Communities. It was clear, though, and we highlighted from the beginning of the day, that these groups were mostly useful time-markers, and discussions carried through between panels with methodologies, bibliographies and approaches arching between the groups. We moved from online teaching resources to postcolonial Angolan literature, to Black Asian and Minority Ethnic LGBTQ refugees and expressions of social identities in South Wales, to discussing language borders in Polish and Catalan literature - listing only a few. We learnt the fine details of methodologies to assessing the training of mentors of English teachers in Chile and the theoretical framework and approach to imagining “Iberia:” in Medieval German literature.

Taking the conversation further, we also included posters in our programme. Considering that for many PhD students, presenting a poster is one of the first steps towards presenting work formally at conferences and in public, we thought it would be a valuable addition to our PhD Forum. For those who could not attend, or could not present, we presented their posters on both sides of the room, with envelopes for feedback to be posted. Between presentations we read and reacted to the posters, seeing themes and approaches from our discussions reiterated on paper.

Following the Start, Stop, Continue retrospective technique to encourage participants to offer feedback on sticky notes, we realised that there was a strong feeling on creating a community and progressing with the idea of working together in this type of forum discussion events (" meet again as a way of follow up", " doing this kind of events more frequently, really helpful"). Participants suggested a two day conference, shifting from a "classroom-type" event "finding different media to present research" or even "dancing your research".  Encouraged by the feedback and positive sharing off all of the participants we are working on ways to carry our experience further, continue building on the exchange developed in our PhD Forum event and ensuring that PhD researchers who embody “Worldmaking in Process” remain in touch. What was a first encounter of PhD students with the concept of “worldmaking” in common will hopefully become a stepping stone into building a growing community of young researchers pursuing a doctoral degree. Some of the participants could be potential future organizers so we can pass the baton to them or learn from our experience and work on the format to build on the experience ourselves in 2020.