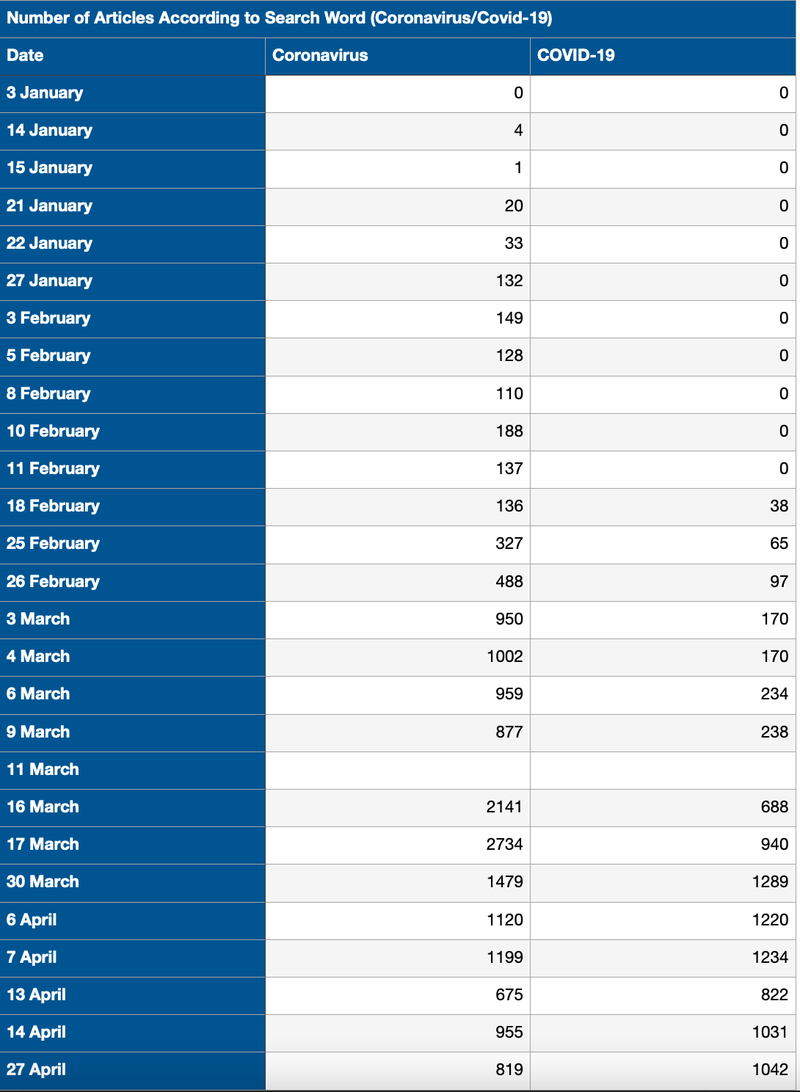 The language changed once it became a European crisis. At the start of the pandemic, Coronavirus was correlated to China, when the term is also linked to keywords such as bioéthique, bienveillance, anxieuse (bioethics, benevolence, anxious; results from 27 January, 27 and 3 February). COVID-19, being more scientific, becomes more frequent as the pandemic spreads in Europe. As it spreads in the West, the narration could be categorised into economic (économique, pétrole, activités, avion, agriculture), medical/epidemiological (santé, transmission, décès), and sociopolitical (gouvernement, autorités, mesures, confinement, masques).

This suggests a tendency to mythologise the crisis while it remained a foreign concern, compared with a far more realist narration when it hit home. Keywords and phrases on the 18 February included the rather literary terms pestiféré (plagued) and les parias de Hubei (the pariahs of Hubei). At this stage, also, the virus was commonly referred to as le Coronavirus de Wuhan.

In the early stages of the crisis, the results demonstrate many comparisons between Coronavirus and previous health crises and pandemics, with keywords including sras, la grippe, ebola (sars, the flu, ebola; results from 25 February). These comparisons phase out around mid-March. Combat narrative is also frequent as they compare the crisis with (The) war. Hence, the term guerre appears several times next to phrases like Guerre contre l’ennemi invisible (war against the invisible enemy), situation de guerre (state of war), la guerre mondiale (the world war).

14 January: Only Chinese or Asian places are named. They discuss the cause of the respiratoire disease.

27 January: most of the news focus on China/Wuhan. There is a use of medical language, which suggests only just acquainting with the disease. There is a correlation between Chine = adepte, anxieuse, avertissant.

8 February: there is a use of emotive language to talk about China.

11 February: mondiale appears as a keyword, but only in terms of the global butterfly effect of China’s local epidemic, not a global pandemic.

3 March: économique is a keyword.

9 March: first emergence of Covid-19. News reports are about locations of the virus, deaths, numbers of infected people and epidemiology.

16 March: the appearance of the term l’ouest suggests grappling with the fact that it is now a Western issue.

6 April: COVID-19 overtakes Coronavirus as the most common referent; most common words are overwhelmingly medical/health-related, and the economy does not seem to feature much.

7 April: confinement becomes a key term - getting to grips with a new lifestyle; masques.

13 April: peut’ is a keyword (is very often used to qualify any statements about Coronavirus or the ongoing situation, indicating a pervasive sense of uncertainty). 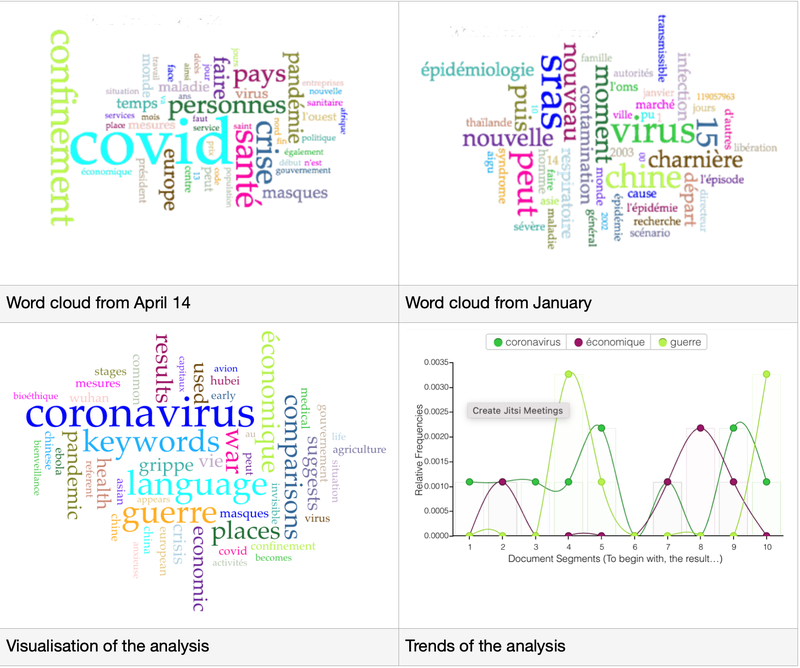