"We need to hear more international work on our stages. And we trust that there are writers all over the world who are already writing really good stuff. What we want is the opportunity to hear it" - William Gregory, Global Voices Theatre associate

Global Voices Theatre works with international playwrights to share their work with UK audiences through new rehearsed readings. With the support of a Language Acts and Worldmaking Small Grant, the company delivered 'Global Arab Female Voices' at Rich Mix on 9 March 2019, and 'Global Queer Voices' at the Arcola Theatre on 6 April 2019. Read their report below.

Curated by Taghrid Choucair-Vizoso, the evening featured excerpts of plays never before staged in the UK, by writers from 5 different countries.

Them by Samah Sabawi (Australia-Palestine)

Curated by William Gregory, the evening featured excerpts of plays by writers from 6 different countries.

Will You Come with Me? by Ebru Nihan Celkan (Turkey)
Translated by Kate Ferguson
Directed by Tasmine Airey

So Far by Vikrant Dhote (India)
Directed by Elliot Jokinen

Across both events GVT engaged with 11 new texts by international writers from 11 different countries of which 5 were translations. We worked with 10 directors, 18 performers and presented the work to 112 audience members.

With the support of Language Acts, Global Voices Theatre were able to invite three external panelists to speak at our events in a conversation chaired by our curators and Artistic Director.

The expertise and insight of these curators and panelists was integral to the success of both events, and allowed audiences to interrogate the texts chosen and seen in performance.

For Global Arab Female voices, our curator was Taghrid Choucair-Vizoso. Taghrid is a theatre-maker, producer, and facilitator with a practice in contemporary work in or about the Middle East. Since 2012, she has been developing intercultural and cross-cultural work with performance artists and playwrights in the UK, Lebanon, Syria, and Palestine. We were also joined by Dr Nesreen N. Hussein, an artist, scholar and Lecturer in Contemporary Theatre at Middlesex University. The conversation was chaired by Global Voices Artistic Director, Lora Krasteva.

For Global Queer Voices, our curator was William Gregory, a translator specialising in work from the Spanish-speaking world. He chaired the discussion panel which included artist and Chinese drag king Whiskey Chow, shortlisted writer Jason Danino Holt, and queer theory and performance researcher at RCSSD Dr Stephen Farrier. Inviting internationally renowned academics, translators and artists to our events has opened up new networks that the company would not otherwise have been able to connect with. This will provide a base from which Global Voices Theatre will be able to reach more international playwrights, tapping into communities abroad that we have not yet engaged with.

Global Queer and Global Arab Female Voices were two in a series of four events testing this new model of showcasing excerpts of plays under one banner, opening up a space for conversation with the audience and creatives involved. We were interrogating how far identity is able to be translated onstage, across borders.

1. Trends and patterns that can be identified in the work of writers who identify within particular globalised communities 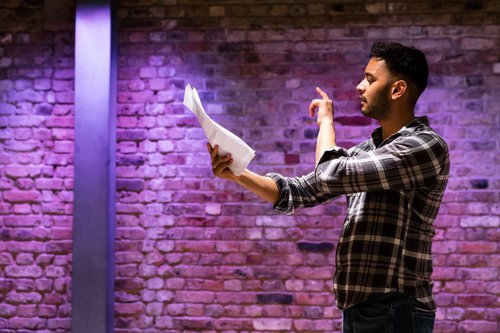 As we started organising our series of events, we wanted to get a clearer picture of how much our selections of text would feel part of a whole. Would the selection (actively or inadvertently) give some indication of what Arab theatre is, when written by women? Were we going to discover more about what Queer theatre is - either in terms of themes, styles, or aesthetic?

Thankfully, our experience so far shows the contrary. As soon as a selection is put forward under an umbrella identity, this magnifying glass exerts the richness and diversity of the texts and the broadness of the themes.

Dr. Nesreen N. Hussein was asked about ‘Arab Theatre’ and if there was at all a through-line in the selections. She noted something that goes beyond Arab identity itself: “The work we saw today shows, in very diverse ways, different approaches to life in a globalised world, that is increasingly marked by displacement [...] it is a very important expression of women’s voices today and how they have navigated theatre as a form”.

The biggest challenge remains managing the curation process as choices made on how this is done affect the final outcome. For Global Arab Female Voices, our team and curator read the texts alone. For Global Queer Voices, we invited another reader who was also one of the directors during the event.

We will continue experimenting with this and we will tend to favour a multiplicity of voices throughout the process (a group of people selecting the plays, directors selecting the excerpts, the team suggesting casting etc.) as we believe this richness gives great creative results. We do recognise however that it is logistically more challenging and puts a bigger strain on GVT’s team. In subsequent editions we will tighten our deadlines and streamline these processes to palliate this. 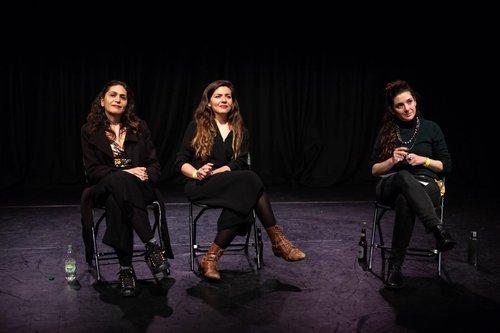 As theatre makers and curators, we were interested in understanding how translated text and work from foreign countries is received from audiences.

One of the biggest challenges remains that we focus on text, in a country where the playwright is king and where there is a very specific way of writing theatre. All of us, despite many of the people involved being migrants, have experience of British theatre and therefore are likely to be biased when reading texts from different cultures. Choosing the right curator and ensuring a multiplicity of voices therefore becomes even more important, to make sure we can showcase different types of plays where those are available. This also relies on a specific and detailed call-out, disseminated in as wide a network as possible - something we will continue to develop as we grow.

To then understand how a selection is received by audiences we need robust data about who watched the events and how they have heard about them, something that continues to be challenging, despite our efforts to distribute post-show questionnaires. From anecdotal interactions and conversations during the post-show talks, we’ve learned most of our audiences either have a connection to the identity showcased and/or are regular theatre goes who aren’t

‘put off’ by the idea of foreign work and theatre in translation. This is obviously an advantage of presenting work in London, with trusted partners and well-known venues. It is not a surprise therefore that the response to the events has been very warm with people coming up to our team to congratulate us, asking to sign up to our newsletter and wanting to know more about future events.

We’ve selected some feedback we received from our participants and audience members:

We are also slowly noticing a crossover in our events, where audiences who attended one play selection will come to see another. This is still not the norm but is encouraging, showing we are building a following who trust our process and output. We look forward to investigating this further in the future and grow our brand and offering.

We will also be liaising with other organisations about increasing the accessibility of our events, for audiences who may not regularly engage with theatre and the arts. In our continued conversations with David Loumgair, Artistic Director of COMMON and theatre companies such as [Foreign Affairs] and Into the Wings, we hope to understand how Global Voices Theatre can appeal to those who are not actively engaged in creative industries, or who may face economic and/or social barriers to the arts.