The Deptford Storytelling Project 2020 was a multilingual filmmaking community that came together to celebrate Deptford's rich and diverse history. All ages, languages and backgrounds were welcome - including those learning English. A report from the project's lead facilitators, Lucy Rogers (Deptford Cinema), Dr Jim Anderson and Dr Vicky Macleroy (Centre for Language, Culture and Learning, Goldsmiths, University of London), is below. 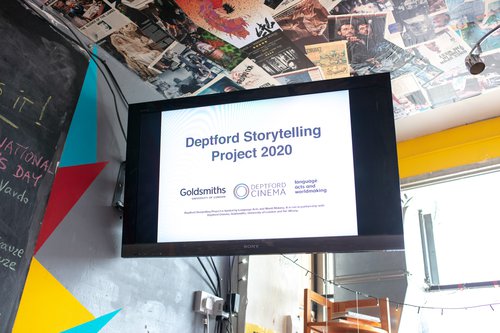 The Deptford Storytelling Project 2020 was a novel experience for all those involved as we moved out of classrooms and schools and set up the project in the centre of the community. The project was run across different sites in Deptford: Deptford Cinema (a community-led cinema); the Albany (a performing arts centre); Deptford Lounge (a local library and community centre); and Goldsmiths, University of London. This placed the project in the heart of the community and opened up the experience to people from many different ages and backgrounds. The project proved immensely popular and after filling all the workshop places we had a long waiting list of people interested in becoming part of the multilingual community film-making project.

The project was run by Jim Anderson and Vicky Macleroy at Goldsmiths in partnership with Lucy Rogers at Deptford Cinema. Deptford Cinema is run entirely by volunteers and the cinema operates an open participatory structure in relation to the programming of events and films. Deptford Storytelling Project 2020 held its first film workshop at the cinema and the public screening of films was also at the cinema a few months later. We were excited in January 2020 to welcome participants into the first of a series of workshops on film making and introduce ways to approach a film project celebrating Deptford’s rich history and diverse multilingual community. The project was made up of four film-making workshops on pre-production, production and post-production (storyboarding, scripting, camera shots and angles, sound effects and music, subtitling and editing) followed by two celebratory film screenings on 7 March 2020. 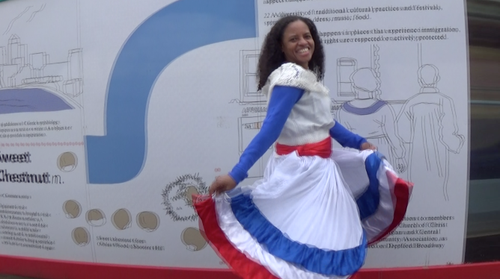 The Deptford Storytelling Project 2020 brought together people of different ages, languages and backgrounds to make films about people’s lives in Deptford. Different languages, voices, poetry, dance and ceremonies were used by the filmmakers to tell their stories about families, friendships and communities. There were 20 filmmakers involved in the project who worked in groups and individually to create 10 very powerful and moving films. These films can be seen on the Critical Connections website and Catherine Boyle has written a blog for Language Acts and Worldmaking about the screening and the films. The films clearly represent the different stories the filmmakers wanted to tell. 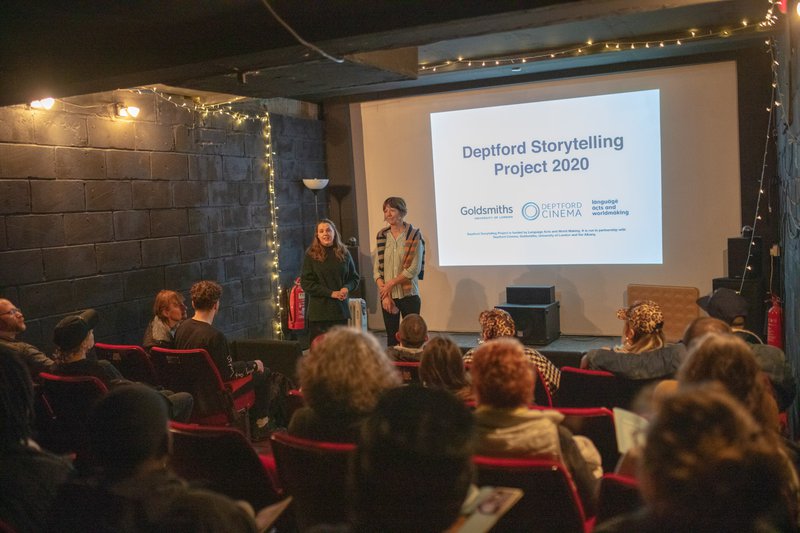 Screening of the Deptford Storytelling Project 2020 at Deptford Cinema

Key questions explored through the project:

In responding to these questions, for now, we focus on the different voices of the filmmakers, the workshop leaders, and members of the public gathered through questionnaires.

Water and Light by Flora Guitton and Sara Shawan

It was interesting how we naturally crossed the Arabic/French and literary/technical borders in order to complement the work of each other. The filming and editing skills presented at the workshops were practised and further extended in our collaborative work.

Presenting our work and feeling part of a great community.

Walk With Me by Michael Williams and Vanessa Crouch

It was crucial that we were co-makers and that he had joint control and input over our approach, what we filmed and what footage we included for the final film.

I learned about how to interview people. I learned I have an interview style and that I’m a sociable person. I learned a lot about myself, that I’m interested in the whole human family.

Deptford and its people are very friendly and welcoming.

It made me more aware of other people’s situations and positions.

Amazing varied mixture of people that contribute to the community in many positive ways.

Journey to Tuat by Zöe Neufville

Sankofa refers to the heart-shaped object in the story and in the Twi language means ‘to go back and get it’ and retrieve past stories to tell now.

Deptford is a very diverse area, all community groups have been playing their part in keeping the neighbourhood special and welcoming.

It was a great pleasure to see other community languages in the area and we learnt how other communities worked with protecting their spoken languages.

Deptford and its people are a very diverse group, and very creative.

Working in a group to collaboratively tell one person’s story.

It made me feel incredibly lucky and grateful to be part of such an amazing, diverse community. I loved seeing and celebrating everyone’s films, it was an honour to see the incredible pieces everyone made.

Carry on Trade by Adriana Kytkova

Deptford is a very vibrant community. There are so many different cultures.

My Bad Sister by Joe Magowan

I loved the screening! I felt very proud afterwards of what we’d achieved. It definitely made me want to continue with the project and start some new ones as well!

This is a new experience for me to work with people with various backgrounds and ages. I always work with children or teachers. This experience has brought me new insights into the scope of digital stories. Everyone has his/her stories to talk about and for people to explore.

Thematic organisation of the workshop series with different presenters and topics. I think the participants gained a lot from this approach (different expertise /experience /varied content /each Saturday different).

The various groups involved represented the genuine diversity of the area and the project demonstrated how cohesive the community is when it is brought together in this way. Their common endeavour, involving creativity and a passion for telling the stories of their Deptford home, provided an uplifting experience for participants and audience alike.

The film makers were an eclectic mix of local residents, from such varied walks of life, with a myriad of skills, experiences and voices, that this was a truly inspiring event.

It seems to me that the digital stories say a lot about the way in which residents and people living, working and residing in Deptford think about their community. There have been films which have examined the way in which their lives are shaped by the community, and also about their own activities they organise in the area too. The stories resonate most since they’re about communities within communities, and those macrocosms are really special.

We were initially worried about stepping into the heart of the community and offering a series of workshops on a Saturday. Would people respond and what would happen when we brought people of very different ages and backgrounds together to make films? It became a raw and powerful experience as people uncovered the stories they wanted to tell, picked up the cameras and tripods, and started to frame their ideas from such varying perspectives. The main message to the filmmakers was always to tell their story and make the story matter and their films show this in wonderful ways.

The project provides persuasive evidence of how digital storytelling can uncover what matters to people and communities. The stories are those of participants themselves, told from their perspective and in their way. This is what gives them their authenticity and why they can contribute significantly both to community building and to community research. They paint a picture of Deptford that is real and personal, that remembers the past and has hope for the future, that delights in its many voices, that defies assumptions, that is magical and ever changing, that sings from the heart. They are illuminating and inspiring and renew a sense of belonging and pride in community. We have all learnt so much!

As a volunteer-run cinema it is our ambition to reach out to the local community and nurture a space where everyone feels welcome to get involved. I was very impressed by the films being made in schools and wanted to know how digital storytelling could work in the community. Inviting people to make and screen their own films is a great way to do this. This project has developed connections with neighbouring organisations, as well as individuals, which we hope to continue into the future. The films make a great argument for the value of true grassroots cinema as a platform for creativity and self-expression.

Read more about the project on the Goldsmith's website here, and hear from some young poets who participated in the project here.