The international conference Performing Translation: Translatorship in the Twenty-First Century was the highlight to three years of growing translation-related activities led by research group Project DaRT. 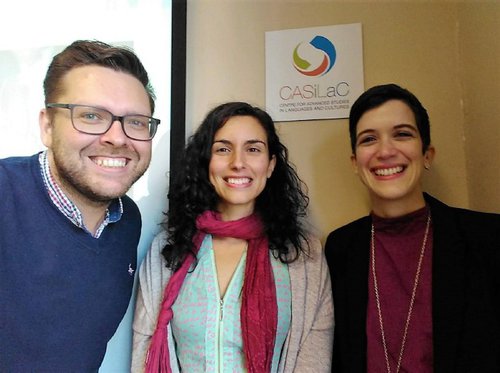 Project DaRT (L-R: Craig Neville, Laura Linares, and Estefanía Muñoz Gómez) was established in 2016 as a postgraduate reading group within the Centre for Advanced Studies in Languages and Cultures (CASiLaC) at University College Cork, Ireland. From these initial collective readings, Project DaRT evolved into a strong community of practice by developing a number of research and engagement opportunities in collaboration with local and international scholars, as well as practitioners, and second and third-level students. These initiatives, ranging from research seminars and industry-focused workshops to fundraising events and outreach projects with secondary schools and the general public, contributed to the international recognition of Project DaRT’s ongoing work on the promotion of translation as a way of meaning making in the current global landscape.

The common thread at the heart of these efforts is the investigation of the multiple ways individuals and communities engage with and in translation through the notions of translatorship and performativity, and how these shape our understanding and expectations of the role and identity of those who move between languages in translation. Connecting with the mission of "foregrounding language’s power to shape how we live and make our worlds”, in 2019 Language Acts and Worldmaking supported Project DaRT’s proposal to organise a two-day international event exploring these questions from a variety of perspectives.

Departing from growing considerations of translation in terms of the “performative nature of cultural communication” (Bhabha 2007), Performing Translation: Translatorship in the 21st Century invited contributions that encouraged interdisciplinary discussions around the identity, agency, and role of the translator in the creation of new meanings and shared experiences as part of our interconnected and multilingual world.

The conference, which took place at University College Cork on the 21st and 22nd of June 2019, was preceded by a masterclass which included presentations by UCC scholars from a number of disciplines including Ethnology, Digital Humanities, and the Study of Religions, as well as a keynote lecture by Professor Catherine Boyle (King’s College) . These sessions, articulated under the theme of cultural representations in and across communities and generously funded by UCC’s School of Languages, Literatures and Cultures, provided a rich prelude to the fruitful discussions that marked the conference over the following two days.

The event brought together over 30 attendees from all over the world, with contributions covering a variety of topics from the renarration of activism in Syria for the Anglophone market to the reflection of mourning and exile in self-translation, the concept of translation as a metaphor, the role of the modern translator as a polycultural nomad, or the relationship between Translation Studies and Disability Studies. In addition, the support from Language Acts and Worldmaking allowed Project DaRT to invite four exceptional guest speakers whose participation greatly contributed to the interdisciplinary spirit of the conference and the marriage of theoretical and practical approaches. Dr Séverine Hubscher-Davidson (Open University) and Dr Gabriela Saldanha (University of Birmingham) delivered thought-provoking lectures on the emotional and psychological impact of translation performance and the commodification of translated literature respectively, while acclaimed translators Jethro Soutar and Rachel McGill each facilitated practical workshops on the challenges surrounding unheralded literary cultures and drama translation. The complete book of abstracts can be downloaded from this link. Workshop attendees consider character voice in theatre translation.

The presence of both practitioners and scholars at different stages of their careers was particularly welcomed by participants, who also praised the diversity of the programme and the opportunities for open discussion, networking, and the building of connections for future collaborative projects. Given the quality of many of the contributions, an intended outcome of the conference is the creation of an edited volume, for which a number of expressions of interest have been collated and a proposal is currently being developed.

The event also proved a valuable opportunity to consider questions regarding best practice for archiving and disseminating research outputs in the arts and humanities, so work is underway to explore formats such as an interactive copy of the programme that would make it possible for video recordings of presentations, participant impressions, and other related materials to be accessed for pedagogical and research purposes. Finally, hosting the conference allowed Project DaRT to be further acknowledged as a successful, bottom-up postgraduate collaborative learning model that may be replicated across disciplines to promote the development of research, management, and outreach skills through hands-on experience in authentic environments. For more information on Project DaRT and Performing Translation: Translatorship in the 21st Century, visit the project website.