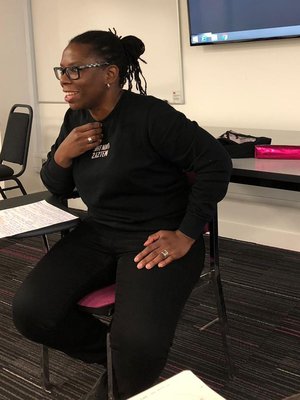 Joëlle Sambi speaking at the workshop

Slam poetry is a laboratory for identity, personal expression and lexical creativity. This workshop was designed to fit within the framework of the Diasporic Identities and Language Transitions strands of Language Acts and Worldmaking. Joëlle, a Belgium-Congolese artist who often uses Lingala language in her slamming, led participants in examining the link between colonial memories and how languages move between different linguistic and cultural worlds in the slam writing and performance. French, Spanish, English and Portuguese language teachers worked together to write slam poetry to discover themselves - developing slam poems around their names, characters, origins and possessions, and mixing them with words, colours, feelings, body parts - and at the end of the day there was a SLAM performance.