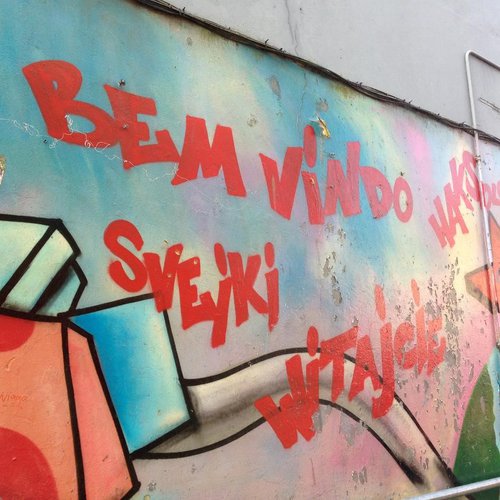 In 2019-20, Prof Karen Corrigan led a project addressing language acts and issues of social inclusion in eight diverse post-primary schools in Northern Ireland, with support from postdoctoral researchers at Queen's University, Belfast (Dr Frances Kane and Dr Kate Mairs), Newcastle University's Centre for the Literary Arts and Northern Ireland's Council for the Curriculum, Examinations and Assessment (CCEA). Frances, Karen and Kate teamed up with Dungannon-Cookstown Area Learning Community (ALC) to provide a series of events and activities for staff and pupils across the region.

The first event ‘Language Acts and Social Inclusion in Post-Primary Classrooms’ took place at St. Patrick’s College (SPC), Dungannon on 30 August 2019. It was a continuing professional development input for the entire staff team. The event addressed issues identified by the Principal surrounding the deficit model often applied to EAL students in this superdiverse school where 52.5% of pupils speak other languages. One objective was to change attitudes towards multilingualism and translanguaging, which are often considered problems rather than resources. Another was to support their Modern Foreign Language staff team since pupil interest in language learning has been dwindling, as has been the case all over the UK. 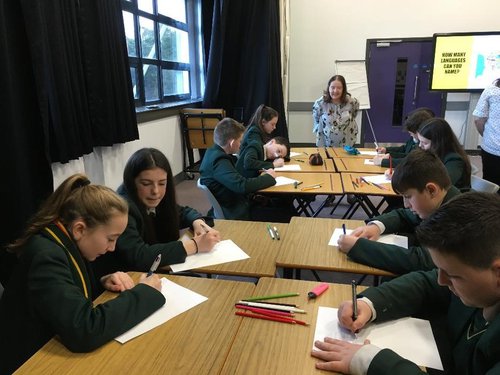 Following the pilot in 2016-2018 of KS4 GCSE materials in SPC, the project team undertook a series of new activities between October 2019 and February 2020, targeting KS3 pupils and their teachers in SPC and seven other schools.

Frances, Karen and Kate delivered workshops to a range of Year 8 learners, including those born and brought up locally as well as ‘newcomers’ (pupils from migrant or asylum-seeking and refugee backgrounds who “do not have satisfactory language skills to participate fully in the school curriculum and do not have a language in common with the teacher”).

The workshops had four aims: (i) To identify the languages and dialects spoken or being taught in local schools along with their key characteristics; (ii) To improve understanding of how ‘mother tongues’ can shape identities; (iii) To change pupils’ attitudes about valuing non-standard dialects and multilingualism as well as about the benefits of studying Modern Foreign Languages; (iv) To learn more about poetic language and put it into practice. 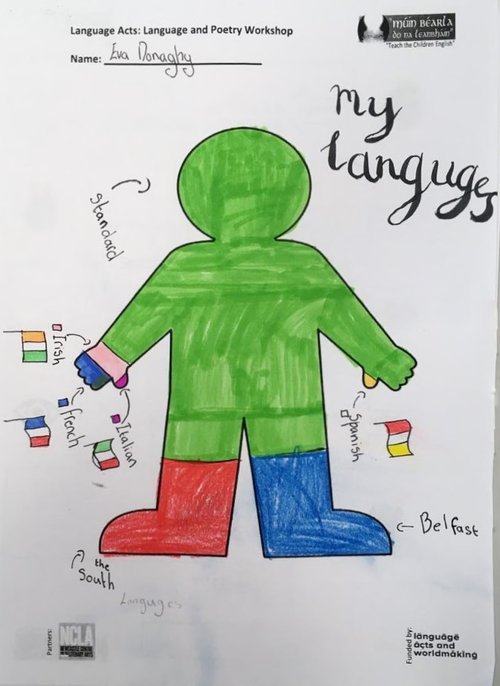 After the workshops, all Year 8 pupils from participating schools across Northern Ireland were encouraged to enter a poetry competition called ‘Your Flexible Throat is Full of a Foreign Language.’ The title is adapted from a poem in the preface to Sinéad Morrissey’s 2001 Carcanet Press collection Between Here and There. Not only did Sinéad allow us to use her poetry in the workshops, she also judged the competition, as did Jaspreet Kaur, a spoken word artist from East London. Pupils were encouraged to write on the theme of belonging, place and identity and to use language that reflected their own diverse linguistic backgrounds.

Top entries from all the schools were selected for an E-Anthology called ‘Voices of Tyrone: An Anthology of Poems by Generation Z’ which is available to download here.

The project has also enabled the co-development of digital KS3 and KS4 resources suitable for remote or blended learning such as has been required during the COVID-19 pandemic. There was input from the ALC staff teams, pupil feedback and support from CCEA to ensure that these resources not only met the needs of learners in this unprecedented educational context but also delivered a programme of online study that remained in line with National Curriculum benchmarks.

These initiatives within the post-primary sector in Northern Ireland have had really positive feedback from staff and pupils alike. Comments included: “It boosted EAL pupils’ confidence”, “It made me more aware of how I use language in the classroom” and “I learned not to judge people on their accent.” Participants definitely came away from the events with the view that having a “flexible throat full of a foreign language” is an asset rather than an impediment.

To find out more about the project, please email Karen at k.p.corrigan@ncl.ac.uk, or see the project's twitter account, @irishtongues.