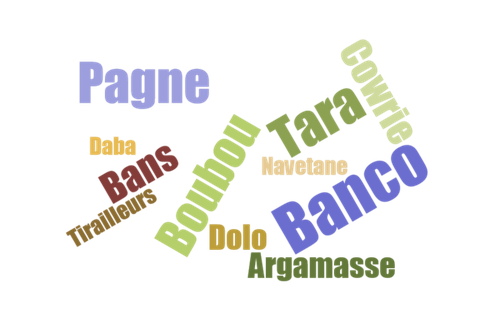 Organised by Prof Claire Griffiths, a half-day symposium and digital interdisciplinary workshop for PGCE trainee teachers of Modern Languages and History took place at the University of Chester on 13 December 2019. The event was designed to provide opportunities to student and early career teachers to explore issues of colonisation and its afterlives in contemporary society through new digital teaching and learning resources developed by the project team and available at www.francophoneafricaarchive.org, and to use these open access resources in their own teaching.

The symposium began at midday with a buffet networking lunch. This was followed by an introductory lecture from Claire as Director of the Re-exploring the Empire: from Colonial Encounters to Transnational Communities teaching materials project. In an illustrated 45-minute talk she explained the genesis of the project located in resources in French-speaking West Africa. Introducing the audience to some visual and textual materials on the project platform www.francophoneafricaarchive.org, Claire explained how digital materials for scholarly research and university teaching are now being developed for GCSE and A level activities. After the introductory talk, and with help from Dr Brenda Garvey, head of French at Chester, and PGCE tutors Rachel Bryson and Daryn Egan-Simon, participants formed into small workshop groups and studied two sets of teaching materials designed for History and Modern Languages/French A level students. Participants were invited to contribute their own ideas and suggestions into the design process.

The event was initially aimed at trainee teachers and early career secondary school teachers of French. On request, it expanded to include trainee teachers of History, which meant there were nearer 50 participants rather than the initial 30 that had been planned for. The diversity of subject interests proved helpful and stimulating. In the discussion questions accompanying the workshop stage, the decolonising agenda of the contemporary postcolonial Francophone world was considered in particular depth particularly in relation to the teaching of socially sensitive subjects (questions socialement vives). Migration, poverty, racism and other issues the students identified as pertaining to historic relations between Europe and Africa were discussed in relation to our workshop materials, for example in a PowerPoint of contemporary Francophone Africa artworks that speak to the legacy of the Atlantic slave trade in the History section of the Learn page. Historical archival resources on French colonisation in West and central Africa revealing the origins of structural challenges facing African former colonies today were another focal point of discussion. We discovered in the course of the workshop that three of our participants were teaching languages other than French. They chose to respond to the workshop questions and the French language focus of resources on www.francophoneafricaarchive.org by proposing ways in which the project and its materials can serve as a template for identifying relevant sources for teaching about colonisation and its aftermath in other global linguistic communities, notably the Hispanic and Lusophone worlds.

Written feedback was provided by all the participants on an end-of-event questionnaire. The most common comments related to the need for teachers to have access to authentic materials for teaching pre-university students. It was noted that the www.francophoneafricaarchive.org platform provides audio-visual and textual resources dating from the colonial era up to the most contemporary reports on current challenges to decolonisation, such as persistent gender inequality, racism and economic migration. Over 90% of the respondents expressed very strong satisfaction with the event, gratitude to the AHRC Language Acts and Worldmaking project for facilitating their participation, and asked the project team to organise further events of this type, such as a day conference for trainee and early career teachers.

For further information about the Re-exploring the Empire project, please contact Claire Griffiths at c.griffiths@chester.ac.uk.