Foreign Affairs is an east London-based theatre company that focuses on translation and international cultural exchange and collaboration. In 2016 it began to work with translator Valentina Marconi to bring the reknowned Croation play Unterstadt - Story of an Osijek Family, an adaptation of the novel of the same name by Ivana Šojat, from page to stage.

Considered one of the best plays in Croatian theatrical history, the play chronicles the lives and trials of a Croatian family of German descent from the early 20th century through WW2 and through to the collapse of the former Yugoslavia. Written in three languages, primarily Croatian, some German and Essekerisch or Esseker German (an autochthonous German dialect mixed with Croatian, Hungarian, Serbian and Yiddish, spoken exclusively in Osijek), the play explores themes of memory and legacy, cultural and linguistic identity on a personal as well as a collective level.

With the support of a Language Acts and Worldmaking Small Grant, in 2019 [Foreign Affairs] and Valentina Marconi were able to take their collaboration further, working with director and dramaturg Ria Samartzi towards a public staged reading. 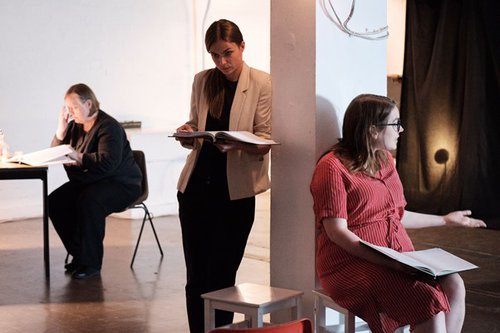 The creative team explored different approaches to presenting multilingual theatre for English speaking audiences. Having a multicultural case with speakers of the source languages was important. The main language, Croatian, was translated into English, and the German was predominantly retained as in the source text, but with some adjustments based on input from the native German speakers in the cast. The third language, Essekerisch or Esseker German, native to Osijek but barely spoken today, was largely kept as it appeared in the source text but with some cuts to avoid repetition.

The staged reading was presented to a small audience followed by a panel discussion and Q&A, where the team gathered feedback in response to the multilingual elements and also the world of the play.

"I loved how the languages were merged, it seemed really natural"

The staged reading occurred just before the 2020 Covid-19 pandemic began. Prior to the pandemic, [Foreign Affairs] had planned a 2021 studio production in London with the aim to secure partnerships for a small-scale tour. These plans have now been postponed to 2022.

Meanwhile, the company is currently developing an online project page – a sort of virtual scrapbook – detailing and documenting the journey from page to stage, offering insights into the collaborative translation process in the form of blog posts and multimedia content. Stay tuned for updates!

To learn more about the work of [Foreign Affairs], please visit www.foreignaffairs.org.uk. To read the full report, please click here.